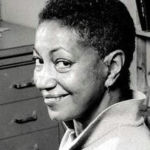 Why Is June Jordan Influential?

According to Wikipedia, June Millicent Jordan was an American poet, essayist, teacher, and activist. In her writing she explored issues of gender, race, immigration, and representation. Jordan was passionate about using Black English in her writing and poetry, teaching others to treat it as its own language and an important outlet for expressing Black culture.

Other Resources About June Jordan

What Schools Are Affiliated With June Jordan?

June Jordan is affiliated with the following schools: