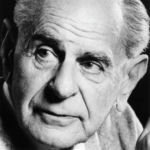 Why Is Karl Popper Influential?

According to Wikipedia, Sir Karl Raimund Popper was an Austrian-British philosopher, academic and social commentator. One of the 20th century's most influential philosophers of science, Popper is known for his rejection of the classical inductivist views on the scientific method in favour of empirical falsification. According to Popper, a theory in the empirical sciences can never be proven, but it can be falsified, meaning that it can be scrutinised with decisive experiments. Popper was opposed to the classical justificationist account of knowledge, which he replaced with critical rationalism, namely "the first non-justificational philosophy of criticism in the history of philosophy".

Other Resources About Karl Popper

What Schools Are Affiliated With Karl Popper?

Karl Popper is affiliated with the following schools:

What Are Karl Popper's Academic Contributions?

Karl Popper has made the following academic contributions: