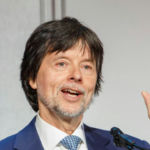 Why Is Ken Burns Influential?

According to Wikipedia, Kenneth Lauren Burns is an American filmmaker, known for his style of using archival footage and photographs in documentary films. His widely known documentary series include The Civil War , Baseball , Jazz , The War , The National Parks: America's Best Idea , Prohibition , The Roosevelts , The Vietnam War , and Country Music . He was also executive producer of both The West , and Cancer: The Emperor of All Maladies .

Other Resources About Ken Burns

What Schools Are Affiliated With Ken Burns?

Ken Burns is affiliated with the following schools: