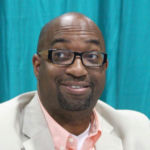 Why Is Kwame Alexander Influential?

According to Wikipedia, Kwame Alexander is an American writer of poetry and children's fiction. His verse novel The Crossover won the 2015 Newbery Medal recognizing the year's "most distinguished contribution to American literature for children." It was also selected as an Honor book for the Coretta Scott King Award. He also won a 2020 Newbery Honor for his illustrated poem The Undefeated. His picture book Acoustic Rooster and His Barnyard Band, was selected for the 2014 "Michigan Reads! One State, One Children's Book" program.

Other Resources About Kwame Alexander

What Schools Are Affiliated With Kwame Alexander?

Kwame Alexander is affiliated with the following schools:

What Are Kwame Alexander's Academic Contributions?

Kwame Alexander has made the following academic contributions: