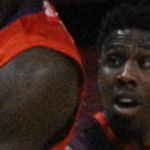 Why Is Landry Nnoko Influential?

According to Wikipedia, Landry Chirst Nnoko is a Cameroonian professional basketball player for Suwon KT Sonicboom of the Korean Basketball League. College career After coming to the U.S. to play high school basketball at Montverde Academy, Nnoko committed to Clemson for college. He played four seasons for the Tigers and was a three-year starter known primarily for his shot-blocking and defence. As a senior, Nnoko earned Atlantic Coast Conference All-Defensive team honours and led the league in blocked shots.

Other Resources About Landry Nnoko

What Schools Are Affiliated With Landry Nnoko?

Landry Nnoko is affiliated with the following schools: