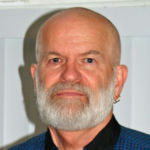 Why Is Larry D. Thomas Influential?

According to Wikipedia, Larry D. Thomas is an American poet. He was the 2008 Texas Poet Laureate, and in 2009 was inducted into the Texas Institute of Letters.Early life and education Thomas was born in Haskell, Texas in 1947. He attended the University of Houston, where he earned a Bachelor's in English in 1970.

Other Resources About Larry D. Thomas

What Schools Are Affiliated With Larry D. Thomas?

Larry D. Thomas is affiliated with the following schools: