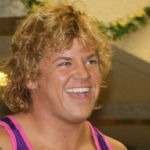 Why Is Larry Sweeney Influential?

According to Wikipedia, Alexander K. Whybrow was an American professional wrestler and manager, better known by his ring name Larry Sweeney. He performed primarily on the American independent circuit, but also competed in Canada, Mexico, Japan and Europe.

Other Resources About Larry Sweeney

What Schools Are Affiliated With Larry Sweeney?

Larry Sweeney is affiliated with the following schools: