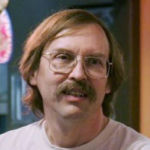 Why Is Larry Wall Influential?

According to Wikipedia, Larry Arnold Wall is an American computer programmer and author. He created the Perl programming language. Personal life Wall grew up in Los Angeles and then Bremerton, Washington, before starting higher education at Seattle Pacific University in 1976, majoring in chemistry and music and later pre-medicine with a hiatus of several years working in the university's computing center before graduating with a bachelor's degree in Natural and Artificial Languages.

Other Resources About Larry Wall

What Schools Are Affiliated With Larry Wall?

Larry Wall is affiliated with the following schools:

What Are Larry Wall's Academic Contributions?

Larry Wall has made the following academic contributions: