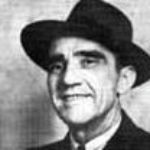 Why Is Lennie Aleshire Influential?

According to Wikipedia, Leonard Harrison Aleshire was a versatile American vaudeville and later country music performer from the 1920s into the 1960s. A singer, dancer and songwriter, he was also half of a musical comedy duo, Lennie and Goo Goo, with Floyd Rutledge. The pair appeared on local and national radio and television programs originating from Springfield, Missouri during the 1940s and 50s.

Other Resources About Lennie Aleshire

What Schools Are Affiliated With Lennie Aleshire?

Lennie Aleshire is affiliated with the following schools: