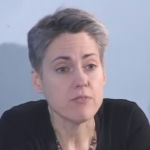 Why Is Lierre Keith Influential?

According to Wikipedia, Lierre Keith is an American writer, radical feminist, food activist, and radical environmentalist. Biography Keith attended Brookline High School in Massachusetts. She began her public involvement in the feminist movement as the founding editor of Vanessa and Iris: A Journal for Young Feminists . During this same period, she also volunteered with a group called Women Against Violence Against Women in Cambridge, where she participated in educational events and protest campaigns. In 1984, she was a founding member of Minor Disturbance, a protest group against militarism from a feminist perspective. In 1986, she was a founding member of Feminists Against Pornography in Northampton, Massachusetts. She is a founding editor of Rain and Thunder, a radical feminist journal in Northampton.

Other Resources About Lierre Keith

What Are Lierre Keith's Academic Contributions?

Lierre Keith has made the following academic contributions: