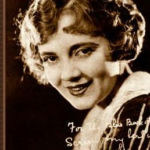 Why Is Lois Wilson Influential?

According to Wikipedia, Lois Wilson was an American actress who worked during the silent film era. She also directed two short films and was a scenario writer. Early life Born to Andrew Kenley Wilson and Constance in Pittsburgh, Pennsylvania, Wilson's family moved to Alabama when she was still very young. She earned a degree from Alabama Normal College , and became a school teacher for young children, soon leaving to pursue a film career.

Other Resources About Lois Wilson

What Schools Are Affiliated With Lois Wilson ?

Lois Wilson is affiliated with the following schools: