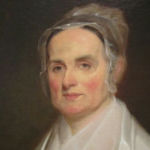 Why Is Lucretia Mott Influential?

According to Wikipedia, Lucretia Mott was an American Quaker, abolitionist, women's rights activist, and social reformer. She had formed the idea of reforming the position of women in society when she was amongst the women excluded from the World Anti-Slavery Convention held in London in 1840. In 1848 she was invited by Jane Hunt to a meeting that led to the first public gathering about women's rights, the Seneca Falls Convention, during which Mott co-wrote the Declaration of Sentiments.

Other Resources About Lucretia Mott