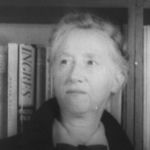 Why Is Marianne Moore Influential?

According to Wikipedia, Marianne Craig Moore was an American modernist poet, critic, translator, and editor. Her poetry is noted for formal innovation, precise diction, irony, and wit. Early life Moore was born in Kirkwood, Missouri, in the manse of the Presbyterian church where her maternal grandfather, John Riddle Warner, served as pastor. Her father, John Milton Moore, a mechanical engineer and inventor, suffered a psychotic episode, as a consequence of which her parents separated before she was born; Moore never met him. She and her elder brother, John Warner Moore, were reared by their mother, Mary Warner Moore. The family wrote voluminous letters to one another throughout their lives, often addressing each other by playful nicknames and using a private language.

Other Resources About Marianne Moore

What Schools Are Affiliated With Marianne Moore?

Marianne Moore is affiliated with the following schools: