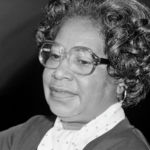 Why Is Mary Jackson Influential?

According to Wikipedia, Mary Jackson was an American mathematician and aerospace engineer at the National Advisory Committee for Aeronautics , which in 1958 was succeeded by the National Aeronautics and Space Administration . She worked at Langley Research Center in Hampton, Virginia, for most of her career. She started as a computer at the segregated West Area Computing division in 1951. She took advanced engineering classes and, in 1958, became NASA's first black female engineer.

Other Resources About Mary Jackson

What Schools Are Affiliated With Mary Jackson ?

Mary Jackson is affiliated with the following schools: