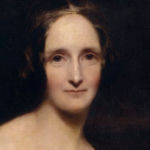 Why Is Mary Shelley Influential?

Other Resources About Mary Shelley

What Are Mary Shelley's Academic Contributions?

Mary Shelley has made the following academic contributions: