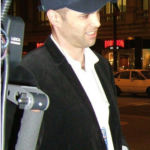 Why Is Matt Taibbi Influential?

According to Wikipedia, Matthew C. Taibbi is an American author, journalist, and podcaster. He has reported on finance, media, politics, and sports. He is a contributing editor for Rolling Stone, author of several books, co-host of Useful Idiots, and publisher of a newsletter on Substack.

Other Resources About Matt Taibbi

What Schools Are Affiliated With Matt Taibbi?

Matt Taibbi is affiliated with the following schools:

What Are Matt Taibbi's Academic Contributions?

Matt Taibbi has made the following academic contributions: