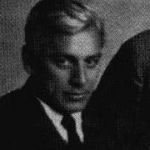 Why Is Max Eastman Influential?

According to Wikipedia, Max Forrester Eastman was an American writer on literature, philosophy and society, a poet and a prominent political activist. Moving to New York City for graduate school, Eastman became involved with radical circles in Greenwich Village. He supported socialism and became a leading patron of the Harlem Renaissance and an activist for a number of liberal and radical causes. For several years, he edited The Masses. With his sister Crystal Eastman, he co-founded in 1917 The Liberator, a radical magazine of politics and the arts.

Other Resources About Max Eastman

What Schools Are Affiliated With Max Eastman?

Max Eastman is affiliated with the following schools: