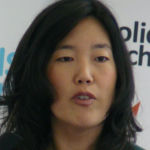 Why Is Michelle Rhee Influential?

Michelle Rhee was born in 1969 in Ann Arbor, Michigan. She received her B.A. in government from Cornell University, before earning a Master of Public Policy from Harvard University’s John F. Kennedy School of Government.

After a somewhat disastrous foray into Teach for America, she founded The New Teacher Project, which trained 23,000 career professionals to become classroom teachers in the first ten years—a remarkable achievement that transformed the recruitment of teachers for schools in Washington, D.C. Rhee was then named Chancellor of the District of Columbia Public School System. Under her leadership, D.C. public schools ended the tenure system and instituted a system of teacher bonuses for high student achievement. Over 200 teachers were dismissed for poor performance.

These changes were not without friction. As Rhee, with nearly no checks on her power to make changes, began firing administrators and principals, she began to receive mounting criticism due to the lack of transparency and due process. She published her book, Radical: Fighting to Put Students First, in 2013. She has served on boards for the National Center for Alternative Certification and the National Council on Teacher Quality. In spite of the controversies surrounding her approaches, Rhee continues to be an activist and lobbyist for student initiatives.

According to Wikipedia, Michelle Ann Rhee is an American educator and advocate for education reform. She was Chancellor of District of Columbia Public Schools from 2007 to 2010. In late 2010, she founded StudentsFirst, a non-profit organization that works on education reform.

Other Resources About Michelle Rhee

What Schools Are Affiliated With Michelle Rhee?

Michelle Rhee is affiliated with the following schools: