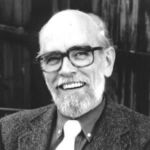 Why Is Miller Williams Influential?

According to Wikipedia, Stanley Miller Williams was an American contemporary poet, as well as a translator and editor. He produced over 25 books and won several awards for his poetry. His accomplishments were chronicled in Arkansas Biography. He is perhaps best known for reading a poem at the second inauguration of Bill Clinton. One of his best-known poems is "The Shrinking Lonesome Sestina."

Other Resources About Miller Williams

What Schools Are Affiliated With Miller Williams?

Miller Williams is affiliated with the following schools: