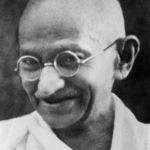 Pre-eminent leader of Indian nationalism during the British Raj

Why Is Mahatma Gandhi Influential?

According to Wikipedia, Mohandas Karamchand Gandhi was an Indian lawyer, anti-colonial nationalist and political ethicist who employed nonviolent resistance to lead the successful campaign for India's independence from British rule, and to later inspire movements for civil rights and freedom across the world. The honorific Mahātmā , first applied to him in 1914 in South Africa, is now used throughout the world.

Other Resources About Mahatma Gandhi

What Schools Are Affiliated With Mahatma Gandhi?

Mahatma Gandhi is affiliated with the following schools:

What Are Mahatma Gandhi's Academic Contributions?

Mahatma Gandhi has made the following academic contributions: