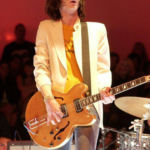 Why Is Nick Valensi Influential?

According to Wikipedia, Nicholas Valensi is an American musician and songwriter, best known for his role as lead and rhythm guitarist in the American rock band The Strokes. Since 2001, the band has released six studio albums, some of which Valensi has also contributed keyboard and backing vocals. In 2013, he founded the band CRX, for which he acts as singer, songwriter, and lead and rhythm guitarist. Their debut album, New Skin, was released in 2016, and was followed by the 2019 album Peek. Valensi has also worked as a songwriter and session guitarist with various artists, including Sia, Regina Spektor and Kate Pierson.

Other Resources About Nick Valensi

What Schools Are Affiliated With Nick Valensi?

Nick Valensi is affiliated with the following schools: