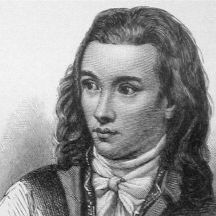 Georg Philipp Friedrich Freiherr von Hardenberg , better known by his pen name Novalis , was an 18th-century German aristocrat, poet, author, mystic and philosopher of Early German Romanticism.Novalis was born into a minor aristocratic family in Electoral Saxony. He was the second of eleven children; his early household observed a strict Pietist faith. He studied law at the University of Jena, the University of Leipzig,and the University of Wittenberg. While at Jena he published his first poem and befriended the playwright and poet Friedrich Schiller. In Leipzig, he met Friedrich Schlegel, becoming lifetime friends. Novalis completed his law degree in 1794 at the age of 22. He then worked as a legal assistant in Tennstedt immediately after graduating. There, he met Sophie von Kühn. The following year Novalis and Sophie became secretly engaged. Sophie became severely ill soon after the engagement and died just after her 15th birthday. Sophie's early death had a life-long impact on Novalis and his writing.