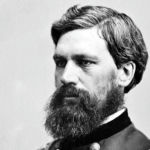 Why Is Oliver Otis Howard Influential?

According to Wikipedia, Oliver Otis Howard was a career United States Army officer and a Union general in the American Civil War. As a brigade commander in the Army of the Potomac, Howard lost his right arm while leading his men against Confederate forces at the Battle of Fair Oaks/Seven Pines in June 1862, an action which later earned him the Medal of Honor. As a corps commander, he suffered two major defeats at Chancellorsville and Gettysburg in May and July 1863, but recovered from the setbacks as a successful corps and later army commander in the Western Theater.

Other Resources About Oliver Otis Howard

What Schools Are Affiliated With Oliver Otis Howard?

Oliver Otis Howard is affiliated with the following schools: