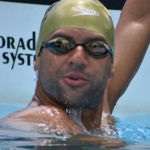 Why Is Omar Pinzón Influential?

According to Wikipedia, Omar Andrés Pinzón García is a competitive swimmer who represented Colombia at the 2004 Olympics in Athens, Greece and 2008 Olympics in Beijing, China. Pinzón attended college in the United States, where he swam for the University of Florida.

Other Resources About Omar Pinzón

What Schools Are Affiliated With Omar Pinzón?

Omar Pinzón is affiliated with the following schools: