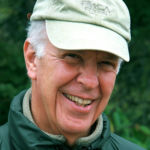 Why Is Parker Palmer Influential?

According to Wikipedia, Parker J. Palmer is an American author, educator, and activist who focuses on issues in education, community, leadership, spirituality and social change. He has published ten books and numerous essays and poems, and is founder and Senior Partner Emeritus of the Center for Courage and Renewal. His work has been recognized with major foundation grants, several national awards, and thirteen honorary doctorates.

Other Resources About Parker Palmer

What Schools Are Affiliated With Parker Palmer?

Parker Palmer is affiliated with the following schools: