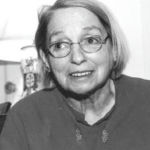 Why Is Patricia Broderick Influential?

According to Wikipedia, Patricia Biow Broderick was an American playwright and painter. She was the wife of actor James Broderick and the mother of actor Matthew Broderick. Early life and career Broderick was born Patricia Biow in New York City, the daughter of Sophie and Milton H. Biow , president of an advertising firm. Her family were Jewish immigrants from Germany and Poland. When she was 18, her mother died in 1943 at the age of 48. Her father died 33 years later. In Mexico, Broderick studied painting with Rufino Tamayo who had been her art teacher at the Dalton School in Manhattan. She began writing plays in the 1940s and several of them were performed in New York and London. Her 1996 screenplay for Infinity was based on the life of Nobel Prize-winning physicist Richard Feynman.

Other Resources About Patricia Broderick