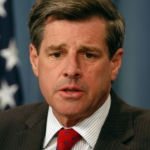 Why Is Paul Bremer Influential?

According to Wikipedia, Lewis Paul Bremer III is an American diplomat. He led the Coalition Provisional Authority following the 2003 invasion of Iraq by the United States, from May 2003 until June 2004. Early life and education Born on September 30, 1941 in Hartford, Connecticut, Bremer was educated at New Canaan Country School, Kent School, and Phillips Academy Andover. Bremer's father was president of the Christian Dior Perfumes Corporation in New York and his mother was a lecturer in art history at the University of Bridgeport.

Other Resources About Paul Bremer

What Schools Are Affiliated With Paul Bremer?

Paul Bremer is affiliated with the following schools: