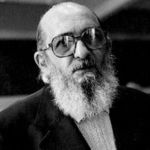 Why Is Paulo Freire Influential?

According to Wikipedia, Paulo Reglus Neves Freire was a Brazilian educator and philosopher who was a leading advocate of critical pedagogy. His influential work Pedagogy of the Oppressed is generally considered one of the foundational texts of the critical pedagogy movement, and was the third most cited book in the social sciences according to Google Scholar.

Other Resources About Paulo Freire

What Schools Are Affiliated With Paulo Freire?

Paulo Freire is affiliated with the following schools:

What Are Paulo Freire's Academic Contributions?

Paulo Freire has made the following academic contributions: