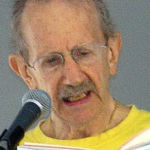 Why Is Philip Levine Influential?

According to Wikipedia, Philip Levine was an American poet best known for his poems about working-class Detroit. He taught for more than thirty years in the English department of California State University, Fresno and held teaching positions at other universities as well. He served on the Board of Chancellors of the Academy of American Poets from 2000 to 2006, and was appointed Poet Laureate of the United States for 2011–2012.

Other Resources About Philip Levine

What Schools Are Affiliated With Philip Levine ?

Philip Levine is affiliated with the following schools:

Philip Levine has made the following academic contributions: