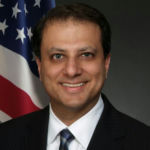 Why Is Preet Bharara Influential?

Areas of Specialization: White Collar Crime, Public Corruption, Cybercrime
Preetinder Singh Bharara is a Distinguished Scholar in Residence for New York University’s School of Law. He graduated from Harvard University with his A.B. and earned his J.D. from Columbia University. He is the former United States Attorney for the Southern District of New York, a role in which he earned a reputation as among the most relentless and effective prosecutors of corruption and white-collar crime.

While serving as one of Manhattan’s Assistant United States Attorneys, he brought major criminal cases against organized crime families such as the Gambino crime family and heavily networked Asian gangs. His prosecution of crimes on Wall Street only added to his reputation, as he investigated and prosecuted Citibank, JPMorgan Chase, and the Galleon Group.

His office was also known for its investigations into political corruption among Republicans and Democrats, with notable convictions of the Majority Leader of the State Senate, Dean Skelos, for accepting bribes, and Sheldon Silver, the Speaker of the New York State Assembly, for public corruption. Bharara was fired in 2017 for refusing to resign at the request of Attorney General Jeff Sessions. He, among the other remaining 46 U.S. Attorneys, were fired after Donald J. Trump was inaugurated.

According to Wikipedia, Preetinder Singh Bharara is an Indian-born American lawyer, author, podcaster and former federal prosecutor who served as the United States Attorney for the Southern District of New York from 2009 to 2017. He served as an Assistant U.S. Attorney for five years prior to leading the Southern District. According to The New York Times, Bharara was one of the "nation's most aggressive and outspoken prosecutors of public corruption and Wall Street crime" during his tenure.

Other Resources About Preet Bharara

What Schools Are Affiliated With Preet Bharara?

Preet Bharara is affiliated with the following schools: