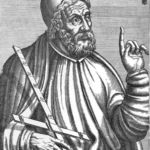 Greco-Egyptian writer and astronomer of Alexandria

Why Is Ptolemy Influential?

According to Wikipedia, Claudius Ptolemy was a mathematician, astronomer, astrologer, geographer, and music theorist, who wrote about a dozen scientific treatises, three of which were of importance to later Byzantine, Islamic, and Western European science. The first is the astronomical treatise now known as the Almagest, although it was originally entitled the Mathēmatikē Syntaxis or Mathematical Treatise, and later known as The Greatest Treatise. The second is the Geography, which is a thorough discussion on maps and the geographic knowledge of the Greco-Roman world. The third is the astrological treatise in which he attempted to adapt horoscopic astrology to the Aristotelian natural philosophy of his day. This is sometimes known as the Apotelesmatika but more commonly known as the Tetrábiblos, from the Koine Greek meaning "Four Books", or by its Latin equivalent Quadripartite.

Other Resources About Ptolemy