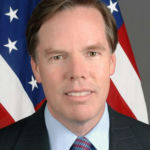 Why Is R. Nicholas Burns Influential?

According to Wikipedia, Robert Nicholas Burns is an American diplomat and academic who is the Senate-confirmed nominee to be the next United States Ambassador to China. Burns is a professor of diplomacy and international politics at the John F. Kennedy School of Government and a member of the Board of Directors of the school's Belfer Center for Science and International Affairs. He is director of the Aspen Strategy Group, senior counselor at The Cohen Group, and serves on the board of directors of Entegris, Inc.

Other Resources About R. Nicholas Burns

What Schools Are Affiliated With R. Nicholas Burns?

R. Nicholas Burns is affiliated with the following schools: