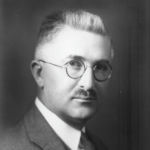 Why Is Ralph Hartley Influential?

According to Wikipedia, Ralph Vinton Lyon Hartley was an American electronics researcher. He invented the Hartley oscillator and the Hartley transform, and contributed to the foundations of information theory. Biography Hartley was born in Sprucemont, Nevada, and attended the University of Utah, receiving an A.B. degree in 1909. He became a Rhodes Scholar at St Johns, Oxford University, in 1910 and received a B.A. degree in 1912 and a B.Sc. degree in 1913. He married Florence Vail of Brooklyn on March 21, 1916. The Hartleys had no children.

Other Resources About Ralph Hartley

What Schools Are Affiliated With Ralph Hartley?

Ralph Hartley is affiliated with the following schools: