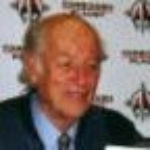 Why Is Ray Harryhausen Influential?

According to Wikipedia, Raymond Frederick Harryhausen was an American-British animator and special effects creator who created a form of stop motion model animation known as "Dynamation". His works include the animation for Mighty Joe Young with his mentor Willis H. O'Brien ; his first color film, The 7th Voyage of Sinbad ; and Jason and the Argonauts , which featured a sword fight with seven skeleton warriors. His last film was Clash of the Titans , after which he retired.

Other Resources About Ray Harryhausen

What Schools Are Affiliated With Ray Harryhausen?

Ray Harryhausen is affiliated with the following schools: