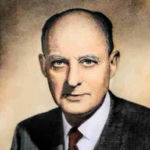 Why Is Reinhold Niebuhr Influential?

According to Wikipedia, Karl Paul Reinhold Niebuhr was an American Reformed theologian, ethicist, commentator on politics and public affairs, and professor at Union Theological Seminary for more than 30 years. Niebuhr was one of America's leading public intellectuals for several decades of the 20th century and received the Presidential Medal of Freedom in 1964. A public theologian, he wrote and spoke frequently about the intersection of religion, politics, and public policy, with his most influential books including Moral Man and Immoral Society and The Nature and Destiny of Man. The latter is ranked number 18 of the top 100 non-fiction books of the twentieth century by Modern Library. Andrew Bacevich labelled Niebuhr's book The Irony of American History "the most important book ever written on U.S. foreign policy." The historian Arthur Schlesinger Jr. described Niebuhr as "the most influential American theologian of the 20th century" and Time posthumously called Niebuhr "the greatest Protestant theologian in America since Jonathan Edwards."

Other Resources About Reinhold Niebuhr

What Schools Are Affiliated With Reinhold Niebuhr?

Reinhold Niebuhr is affiliated with the following schools:

What Are Reinhold Niebuhr's Academic Contributions?

Reinhold Niebuhr has made the following academic contributions: