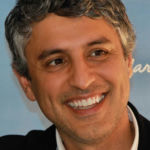 Why Is Reza Aslan Influential?

According to Wikipedia, Reza Aslan is an Iranian-American scholar of sociology of religion, writer, and television host. A convert to evangelical Christianity from Shia Islam as a youth, Aslan eventually reverted to Islam but continued to write about Christianity. He has written four books on religion: No God but God: The Origins, Evolution, and Future of Islam, Beyond Fundamentalism: Confronting Religious Extremism in the Age of Globalization, Zealot: The Life and Times of Jesus of Nazareth, and God: A Human History.

Other Resources About Reza Aslan

What Schools Are Affiliated With Reza Aslan?

Reza Aslan is affiliated with the following schools:

What Are Reza Aslan's Academic Contributions?

Reza Aslan has made the following academic contributions: