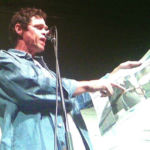 Why Is Rich Hall Influential?

According to Wikipedia, Richard Travis Hall is an American comedian, writer, documentary maker and musician, first coming to prominence as a sketch comedian in the 1980s. He wrote and performed for a range of American networks, in series such as Fridays, Not Necessarily the News , and Saturday Night Live.

Other Resources About Rich Hall

What Schools Are Affiliated With Rich Hall?

Rich Hall is affiliated with the following schools: