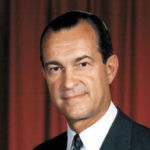 Director of the Central Intelligence Agency

Why Is Richard Helms Influential?

According to Wikipedia, Richard McGarrah Helms was an American government official and diplomat who served as Director of Central Intelligence from 1966 to 1973. Helms began intelligence work with the Office of Strategic Services during World War II. Following the 1947 creation of the Central Intelligence Agency , he rose in its ranks during the presidencies of Truman, Eisenhower and Kennedy. Helms then was DCI under Presidents Johnson and Nixon, yielding to James R. Schlesinger in early 1973.

Other Resources About Richard Helms

What Schools Are Affiliated With Richard Helms?

Richard Helms is affiliated with the following schools: