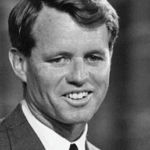 Why Is Robert F. Kennedy Influential?

According to Wikipedia, Robert Francis Kennedy , also referred to by his initials RFK or by the nickname Bobby, was an American lawyer and politician who served as the 64th United States Attorney General from January 1961 to September 1964, and as a U.S. Senator from New York from January 1965 until his assassination in June 1968. He was, like his brothers John and Edward, a prominent member of the Democratic Party and has come to be viewed by some historians as an icon of modern American liberalism.

Other Resources About Robert F. Kennedy

What Schools Are Affiliated With Robert F. Kennedy?

Robert F. Kennedy is affiliated with the following schools:

Robert F. Kennedy has made the following academic contributions: