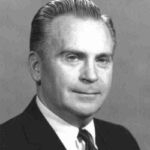 Why Is Robert Kearns Influential?

According to Wikipedia, Robert William Kearns was an American engineer, educator and inventor who invented the most common intermittent windshield wiper systems used on most automobiles from 1969 to the present. His first patent for the invention was filed on December 1, 1964, after a few previous designs by other inventors had failed to gain any traction in manufacturing.

Other Resources About Robert Kearns

What Schools Are Affiliated With Robert Kearns?

Robert Kearns is affiliated with the following schools: