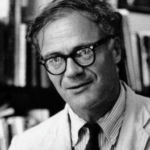 Why Is Robert Lowell Influential?

According to Wikipedia, Robert Traill Spence Lowell IV was an American poet. He was born into a Boston Brahmin family that could trace its origins back to the Mayflower. His family, past and present, were important subjects in his poetry. Growing up in Boston also informed his poems, which were frequently set in Boston and the New England region. The literary scholar Paula Hayes believes that Lowell mythologized New England, particularly in his early work.

Other Resources About Robert Lowell

What Schools Are Affiliated With Robert Lowell?

Robert Lowell is affiliated with the following schools:

What Are Robert Lowell's Academic Contributions?

Robert Lowell has made the following academic contributions: