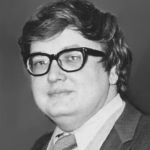 Why Is Roger Ebert Influential?

According to Wikipedia, Roger Joseph Ebert was an American film critic, film historian, journalist, screenwriter, and author. He was a film critic for the Chicago Sun-Times from 1967 until his death in 2013. In 1975, Ebert became the first film critic to win the Pulitzer Prize for Criticism. Neil Steinberg of the Chicago Sun-Times said Ebert "was without question the nation's most prominent and influential film critic," and Kenneth Turan of the Los Angeles Times called him "the best-known film critic in America."

Other Resources About Roger Ebert

What Schools Are Affiliated With Roger Ebert?

Roger Ebert is affiliated with the following schools:

What Are Roger Ebert's Academic Contributions?

Roger Ebert has made the following academic contributions: