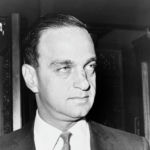 Why Is Roy Cohn Influential?

According to Wikipedia, Roy Marcus Cohn was an American lawyer and prosecutor who came to prominence for his role as Senator Joseph McCarthy's chief counsel during the Army–McCarthy hearings in 1954, when he assisted McCarthy's investigations of suspected communists. In the late 1970s and during the 1980s, he became a prominent political fixer in New York City. He represented and mentored the real estate developer and later U.S. President Donald Trump during his early business career.

Other Resources About Roy Cohn

What Schools Are Affiliated With Roy Cohn?

Roy Cohn is affiliated with the following schools: