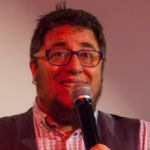 Why Is S. Bear Bergman Influential?

According to Wikipedia, S. Bear Bergman is an American trans man, author, poet, playwright, and theater artist whose gender identity is a main focus of his artwork. Biography Bergman was educated at Concord Academy, was one of the founders of the first Gay–straight alliance and a member of the Governor of Massachusetts' Safe Schools Commission for LGBT youth. He received a Bachelor of Fine Arts degree from Hampshire College in 1996.

Other Resources About S. Bear Bergman

What Schools Are Affiliated With S. Bear Bergman?

S. Bear Bergman is affiliated with the following schools: