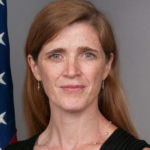 Why Is Samantha Power Influential?

Samantha Power is director of the new International Peace and Security Project at Harvard Kennedy School, member of the Board of Directors at the International Refugee Assistance Project, and joint faculty for Harvard’s Law School and Kennedy School. She earned a B.A. from Yale University and a J.D. from Harvard University. It is hard to overstate Samantha Power’s influence on global affairs.

After a time as a war correspondent in Yugoslavia, she returned to Harvard University to be the Founding Executive Director of the Carr Center for Human Rights Policy. From there, she began working with then U.S. Senator Barack Obama, advising him on foreign policy. From there, she has served as foreign policy advisor to his presidential campaign, his transition team, on his National Security Council as Special Assistant to the President, and Senior Director for Multilateral Affairs and Human Rights, and United States Ambassador to the United Nations, where she remained until she was replaced by Nikki Haley.

In her role as advisor to the President, she lobbied for humanitarian intervention for Libya and was criticized for her desire to use the United States military to prevent atrocities, rather than merely for defense, although once she moved on to the United Nations, she lost some of that idealism.

According to Wikipedia, Samantha Jane Power is an Irish-American journalist, diplomat and government official who is currently serving as the Administrator of the United States Agency for International Development. She previously served as the 28th United States Ambassador to the United Nations from 2013 to 2017. Power is a member of the Democratic Party.

Other Resources About Samantha Power

What Schools Are Affiliated With Samantha Power?

Samantha Power is affiliated with the following schools: