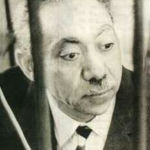 Why Is Sayyid Qutb Influential?

According to Wikipedia, Sayyid 'Ibrāhīm Ḥusayn Quṭb , known popularly as Sayyid Qutb , was an Egyptian author, educator, Islamic scholar, theorist, revolutionary, poet, and a leading member of the Egyptian Muslim Brotherhood in the 1950s and 1960s. In 1966, he was convicted of plotting the assassination of Egyptian President Gamal Abdel Nasser and was executed by hanging. He is considered as "the Father of Salafi jihadism", the religio-political doctrine that underpins the ideological roots of global jihadist organisations such as al-Qaeda and ISIL.

Other Resources About Sayyid Qutb

What Schools Are Affiliated With Sayyid Qutb?

Sayyid Qutb is affiliated with the following schools:

What Are Sayyid Qutb's Academic Contributions?

Sayyid Qutb has made the following academic contributions: