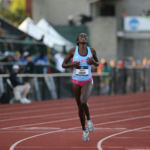 Why Is Sharon Lokedi Influential?

According to Wikipedia, Sharon Lokedi is a Kenyan middle and long-distance runner from the major city of Eldoret. She was recruited to the University of Kansas where she has studied nursing and business. She began competing first in collegiate track and cross country in 2015. Three years later, she won the 10000 m at the 2018 NCAA Division I Outdoor Track and Field Championships. She has been a 10-time All-American & 12-time Big 12 champion, as of March 2019.

Other Resources About Sharon Lokedi

What Schools Are Affiliated With Sharon Lokedi?

Sharon Lokedi is affiliated with the following schools: