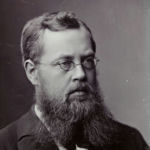 Why Is Sophus Lie Influential?

According to Wikipedia, Marius Sophus Lie was a Norwegian mathematician. He largely created the theory of continuous symmetry and applied it to the study of geometry and differential equations. Life and career Marius Sophus Lie was born on 17 December 1842 in the small town of Nordfjordeid. He was the youngest of six children born to a Lutheran pastor named Johann Herman Lie, and his wife who came from a well-known Trondheim family.

Other Resources About Sophus Lie

What Schools Are Affiliated With Sophus Lie?

Sophus Lie is affiliated with the following schools: