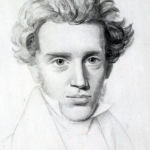 Why Is Søren Kierkegaard Influential?

According to Wikipedia, Søren Aabye Kierkegaard was a Danish philosopher, theologian, poet, social critic, and religious author who is widely considered to be the first existentialist philosopher. He wrote critical texts on organized religion, Christendom, morality, ethics, psychology, and the philosophy of religion, displaying a fondness for metaphor, irony, and parables. Much of his philosophical work deals with the issues of how one lives as a "single individual", giving priority to concrete human reality over abstract thinking and highlighting the importance of personal choice and commitment. He was against literary critics who defined idealist intellectuals and philosophers of his time, and thought that Swedenborg, Hegel, Fichte, Schelling, Schlegel, and Hans Christian Andersen were all "understood" far too quickly by "scholars".

Other Resources About Søren Kierkegaard

What Schools Are Affiliated With Søren Kierkegaard?

Søren Kierkegaard is affiliated with the following schools:

What Are Søren Kierkegaard's Academic Contributions?

Søren Kierkegaard has made the following academic contributions: