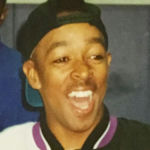 Why Is Spud Webb Influential?

According to Wikipedia, Anthony Jerome "Spud" Webb is an American former professional basketball player. Webb, who played in the National Basketball Association , is known for winning a Slam Dunk Contest despite being one of the shortest players in NBA history, being listed at tall. He is currently the president of basketball operations for the Texas Legends, the NBA G League team for the Dallas Mavericks in Frisco, Texas.

Other Resources About Spud Webb

What Schools Are Affiliated With Spud Webb?

Spud Webb is affiliated with the following schools: